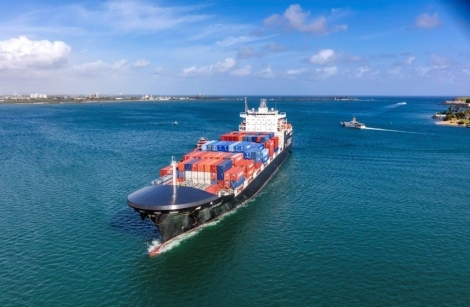 he vessel was named at the company’s Isla Grande Terminal in San Juan, where Crowley’s investments have ushered in a new era of supply chain services in the U.S. mainland-Puerto Rico trade.

The company said that MV Taíno is among the first of its kind to be powered by liquefied natural gas (LNG), like its sister Commitment Class ship MV El Coquí, which entered service in 2018.

Both ships, which feature a length of 219.5 meters and 26,500 deadweight tons, are able to transport up to 2,400 TEUs. Constructed at VT Halter Marine in Pascagoula, each of the Jones Act ships have the capacity to carry 400 cars and large vehicles.

To enhance supply chain velocity with these ships, Crowley also made significant investments in terminal and related infrastructure on the mainland and in Puerto Rico. At Isla Grande, the company added a new, 900-foot pier and three ship-to-shore gantry cranes. The company also implemented a new terminal operating system and added container staging areas and handling equipment for both refrigerated and dry cargo – all while reducing gate turn times.